ANGELO AMONG THE MASTER

ANGELO ACCARDI’S ‘HARING BETWEEN THE MASTERS’

As an Italian, Angelo Accardi spent a short interval at the Art Academy of Naples. He set up his personal studio in the early nineties in Italy, embarking on a journey that would lead him to create some of the world’s most intricate and enigmatic works in contemporary art. His first series depicted figures against a social background, incorporating famous works of art spanning the centuries as far back as seventeenth-century Vermeers and recent as twenty-first-century Pop Art.

In the course of his artistic development, Accardi has been on a constant search for new sensations. His early works experiment with texture, veiling his figures with a wool-like softness that will later turn into his signature paint splatters. Accardi’s paintings challenge ideas of what a “finished piece” of art looks like and how one uses art materials to render a work of art.

He does more than explore the surface of the canvas, and the materials of his sculpture, but endeavors to enter into the very psyche of his viewers, conveying a message, feeling, or idea through subtly hints in his work. Breaking down an Accardi is one of the most satisfying gallery experiences. His works are so full of nuance, that successfully interpreting his subtle gesticulations toward the viewer is similar to the feeling of solving the Sunday New York Times.

Some of Accardi’s most compelling pieces blend subjects and background, democratizing what has historically and institutionally been a hierarchical arrangement. Time and space, foreground and background, subject and environment blend in works like “HARING BETWEEN THE MASTERS,” where a Keith Haring hangs in a frame between a Roy Lichtenstein painting and Titian’s “A MAN WITH A QUILTED SLEEVE.” The Ostriches walking around in the gallery seemingly ask the viewer, what are we all doing here?

Accardi has exhibited in prestigious galleries in Italy and abroad, such as Rossetti and Pini in Rome, the Manzoni Art Studio of Milan, and the Klaus Lea Gallery of Munich. Today his works are included in international galleries including Bel Air Fine Art in Geneva, Ransom Art Gallery in London, Zenzero Art Gallery in Lugano, Avant Gallery in Miami and in 2017 he was picked up by Eden Fine Art’s Gallery as one of their foremost contemporary talents 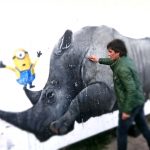 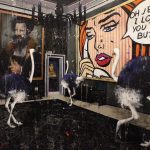