A MASHUP OF HISTORY WITH ANGELO ACCARDI

Looking at an Accardi painting is like staring at a mashup of history- the fun is trying to find the threads that link it all together. In fact, n Art History degree is helpful when taking a look at a piece by Angelo Accardi, who hides secret messages in his works using artworks that span centuries and emphasizing the histories that belong to each of those pieces.

Accardi’s sophistication is distinguished in his work’s subtle politics. His paintings are not graffiti art spray-painted on the side of buildings, raging at ‘the man,’ but observations made, or questions posed at the viewer using precisely placed characters, figures, and backgrounds and highlighting the connections between them.

Accardi’s “FLAT IRON MINION” deftly hints at the symbolism of the district that connects two sides of NYC, calling it the ‘track’ that divides one side from the ‘other side.’ A landmark skyscraper, the Flatiron Building, formerly known as the Fuller Building, is one of the tallest buildings in the city at twenty stories high. Anchoring the North and South of the city, this quintessential symbol of NYC connects uptown and downtown, in fact, this vantage point is one of the only buildings that allows one to see both Downtown and Uptown from a high-story window.

Even in a century where downtown prices are rising, and even Brooklyn has been drawn into the map by real estate agents and art dealers, downtown NYC has historically been home to lower-class residents of the big apple, whereas upper Manhattan has long been synonymous with the more upper class, wealthy residents, not to mention National institutions of the arts like the Metropolitan Museum of Art, the Natural History Museum, The Frick, Guggenheim, Museum of Modern Art, and even the scenic grounds of Central Park and the Central Park Zoo.

What Accardi does is brilliant, because all this information builds to reveal the intention of the piece. He blends two backgrounds–one, a junction that divides a city into two, and the second, incorporation of Damien Hirst’s Dot Painting. Hirst, talking about his own work is quoted saying, “mathematically, with the spot paintings, I probably discovered the most fundamentally important thing in any kind of art.

Which is the harmony of where color can exist on its own, interacting with other colors in a perfect format.” Hirst’s paintings promoted harmony of color, a stunning euphemism for the unification of NYC’s diverse population, hilariously represented by Minions and ostriches. Accardi uses a vast range of scholarship to create a painting that subtly comments on the division in NYC and the ambition to integrate her. Each piece of Accardi’s is a staggering display of technique, knowledge, and creativity. Grab your books and get yourself to a gallery, it’s so worth it. 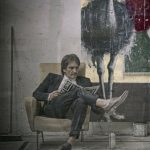