Meet Angelo Accardi, a painter whose canvases are capable of tracing tenaciously dreamlike profiles with their apparent incongruity.

Accardi succeeds in creating a world where time and space, foreground and background, and the subject and his environment merge together. Within this world that he creates, but beyond the spirit of the time, Accardi appears to access the same psyche as his spectators, transmitting a message, a feeling, or an idea through skillful expressive details.  He is spurred on by means of a style that could prove common thanks to its link to scratches, to drips, and in some cases, to “dirty painting.” The interpretative key of Accardi’s art, however, is much more.

His works are worlds in which parts of his life exist and enter into a dialogue with contemporary symbols such as characters of the cinema and cartoon figures, as well as looming “misplaced” presences such as ostriches and rhinos in the city, in glimpses of well-known urban realities and museums.

Angelo Accardi often unites masterpieces from the past with phenomena of our time. He creates constant dissonant presences juxtaposed with a chaotically ordered metropolitan. His works are disturbing but compelling because they are raw and ironic. Different artistic experiences, clear stories, never distorted by the need for script or market. They are streams of pictorial consciousness in which many symbols, seemingly distant from each other, re-exist, beyond the aesthetic aspect, certainly cared for, however not at the center of the decisive choice in the paintings.

Today, life no longer seems to belong to itself. Accardi remembers this and does so wisely as to free it. All that remains is to abandon yourself to his art, inside the world but outside any conventional scene.

HERE’S THE LINK, THE NEWSPAPER IS ILGIORNALEOFF.COM 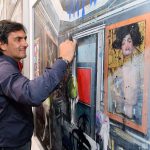 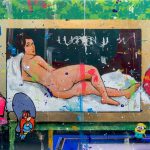