This term has Greek roots in the word ikon/eikon, which translates to “image.” There is a religious origin here, as icons were initially a devotion object found in the orthodox Greek church. Here, it boiled down to a picture of Christ on a panel.

What’s important here is not necessarily what is in the piece, but the symbolism attached to it. That is the premise for icons in art today.

What Are Icons in Art?

Icons in art are symbols at their core. The principle of iconography exploits image types or systems that are intrinsically linked to certain meanings. When done well, critics or connoisseurs should be able to review an art piece and be able to ascertain what the iconography is attempting to convey. The difficulty in doing so can range between none and tremendous

A perfect simple example is a use of a dove alongside a woman. While the woman in the art piece may not necessarily provide any context on her own, the appearance of the dove indicates that she is a goddess.

What Is the Purpose of an Icon in Art?

Considering that iconography is the science of identification through representation, icons in art are meant to provide clarity. Typically, when a piece is created, assuming there is a certain level of passion and presence, the artist would hope that those to whom the work is displayed would be able to ascertain what is being represented.

However, this goes beyond visual interpretation. You often see where feelings are meant to be conveyed as well. No one can argue that it is a lot easier to achieve an emotional impact with a song or video.

To the credit of many artists throughout history, the objective has certainly been achieved. Taking things back to the religious side of the fence, the icons may also aim to create a certain kind of air. For example, icons in art used here may be trying to get people to embrace a feeling and spirit of reverence.

What Is an Icon in Visual Art?

Unlike performing arts, the visual counterparts are meant to appeal to the eyes. Therefore, the symbolic iconography present in this case tends to come in the form of drawings or paintings, for example, which take advantage of known or even unknown techniques.

The information above was heavily focused on the way they’re used on the visual side, but you should bear in mind that performing arts do have their own icons as a member measure of symbolism as well.

What Are Examples of Icons?

There are several examples of icons in art throughout history. For example, there is the 18th-century work by William Blake, who aimed to manifest his vision of man and God by using complex themes in his iconography.

Based on the explanations given above, you may have inferred that all iconography is rooted in simplicity. However, Blake’s attempt has seen many scholarships devoted to interpreting it.

Pablo Picasso, who is also famous for several pieces, demonstrated the use of icons in art during the 20th century. What you would notice is that much of it would have been autobiographical.

Some simpler examples are akin to much of what was said before and include the lamb, the Virgin Mary, the cross, images meant to represent Jesus Christ, etc.

Differing an Icon from a Pictogram

As you hear about icons in art and iconography, another representative term may make its way into your mind. This is that of a pictogram. After all, pictograms are also meant to offer context and representation through symbolism.

The real difference lies in the level of detail. Pictograms tend to offer schematic representation, meaning that there is a high level of abstraction present. The simplicity that you may assume from initially hearing about icons in art is characteristic of pictograms. That’s because they are meant to be understood by an audience regardless of faith, country, language, or culture.

While this does not mean that icons in the art cannot offer simple interpretation styles, there is far more room for complexity. Apart from exploring creative freedom for the sake of detail, artists who employ icons tend to also take advantage of the fun element that the lack of restrictions introduces.

Iconography is the core principle where icons in the art are concerned. They offer representation by using small or great detail. The defining factor that separates them from pictograms is that the latter is characterized by simplicity.

Angelo Accardi, a Napoli-based artist from Italy, has demonstrated countless examples of icons in art. His debut on the art scene, being characterized by a “figura” (use of pictorial and symbolic art meant to represent the human body), would be an illustration of things to come in his career. 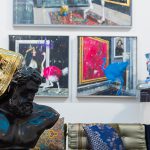